Welcome to this, the most recent (as of this writing) instance of the venerable WHV year transition post tradition!

You can find previous editions here:

Putting that list together just reminded me of an interesting observation: The more I try to take notes and document everything I see, the more I notice the multiscalar nature of my subjective experience being exposed.

I make detailed daily notes, all of them grouped in monthly text files.

At a slightly higher scale, the frequency of these WHV blog posts is somewhere between a post per week down to a post every three weeks.

When I write each blog post, I look back through the previous weeks, at a daily scale, and perform an extremely lossy summarisation.

When I write the year transitions, I perform an extremely lossy summarisation of the weekly-scale WHV posts.

The list above links together the various yearly transition posts, thus creating a lovely ball of multi-scalar confusion, which should not be confused with a lemur ball, shown below: 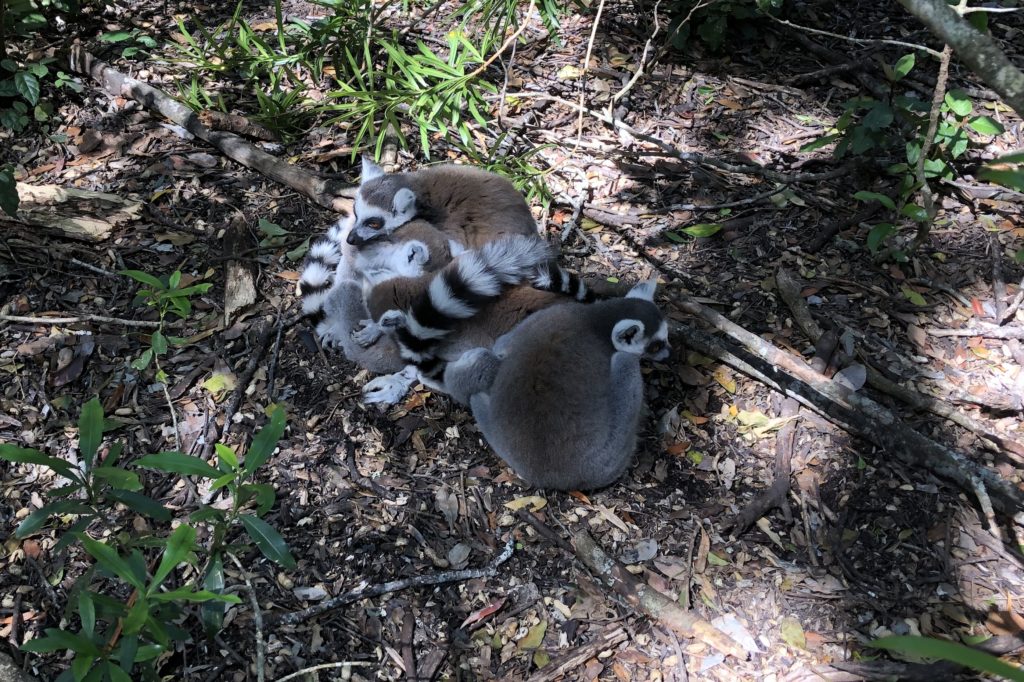 At the Monkeyland Primate Sanctuary in Plettenberg Bay, I learned that lemurs huddle together in these aptly called “lemur balls” to share body heat. When it’s cold enough, they even take turns to be in the middle.

WARNING: This post has grown into a long ramble over the past few days. I hope that you enjoy reading the ramble as much as I did thinking of you while writing it.

I am now back here at the start, after having been almost at the end, because I did not want you to have the idea that my 2018 did not have aspects I am not that happy with, or that I don’t use multiple negations in confusing ways often enough.

(As an aside, a friend and I have been exchanging photos of the less glamorous but entirely normal aspects of our vacations via WhatsApp: Plastic on the beach, the washing line, filthy toilets, truly terrible interior decor, and so on. What started as a joke has turned into an unintended but interesting psychological experiment in reverse image crafting, strongly underlining the effect that this sort of communication can have.)

Back to my main story: During retrospection, I have the tendency to focus (sorry, couldn’t resist) on the good parts, because this is what I remember the best.

However, for the purpose of this post, I did want to spend some words on one of the (multiple!) issues that I struggled with in 2018.

At the very least five of the posts I wrote in 2018 dealt in some way with focus.

The mentioned posts specifically and my thinking generally take the form of some analysis but mostly tools and tricks to try and improve the frequency, intensity and length of periods of focus.

(What you don’t read in the posts because of above-mentioned memory bias, is that there is usually a significant amount of inwardly-directed regret and disappointment involved.)

Even more subtle is the problem of selecting That One Most Suitable Thing to focus on. What’s going to have the most impact? What do I have capacity for at the moment? Can I trust my own subjective assessment of my current capacity, or is Lazy-Me being sneaky?

By the time I have made a decision, it’s probably wrong. Sometimes it’s a good decision, but by then the little block of time I had has flown away or has been blown to smithereens by the latest interruption, and so the quality of the decision is moot.

I would have expected that at this advanced age focus would come naturally and easily, and that I would know exactly what to do. However, I have had to accept that focus will probably remain this slippery and require constant attention (haha I see what I did there) until the very end.

Besides eating well, sleeping well, exercising regularly and taking time to meditate (just in case!), our old friend the pomodoro technique is still the best tool in the box.

During 2018, 36 blog posts were published here, most of which were Weekly Head Voices. Those of you who have a math degree or two will not need much time to calculate that the “W” in “WHV” is at the moment mostly a little inside joke.

The wordpress.com statistics plugin reports just over 19000 visitors (unique IP numbers) who were responsible for just over 26000 page views for the whole year.

Because many people use some form of ad and/or tracking blocking these days, their visits won’t be counted, as the wordpress.com statistics relies on a tiny image which is hosted by wordpress.com, access to which is (rightfully) blocked by many blocker plugins.

In order to get a better idea of how many ad-blocker people read my stuff, I installed the wp-statistics plugin, which locally tallies up all visits and hence is not blocked by blockers, at the start of March. For the period from March 2018 until the end of the year, it is reporting just over 74000 visitors and somewhere north of 390000 page hits.

Although to me this seems on the high side, I do think we can safely say that there were somewhere between 19000 and 74000 unique hosts, which to me is a very pleasant surprise.

However, I am by far the happiest due to all of the interactions I had with friends, mostly old and some new, on this blog. Most recently, the comments section of WHV #156 blew up in such a brilliant way!

More generally speaking, even when there are no comments, I know that throughout the year I am connecting with various subsets of my peeps through the posts on this blog. This acts as tremendous motivation to keep on writing. If even a single friend reads, it has been more than worth it.

(BTW, there is now a telegram group, quite surprisingly called “headvoices”, that you can join to receive a summary whenever a new post is published, and for general chitchat. Although so far only two of my most avant-garde friends have joined, this new form of blog-related communication excites me!)

Surprisingly, I again will aim to write one WHV post per week.

I will probably fail again, but I believe that this is one of those cases of “aim for the stars, reach the moon”.

As mentioned above, writing these letters and writing them regularly is really important to me.

(BTW, I should probably have declared email bankruptcy years ago. I am just managing to keep head above water, but writing letters to friends like we used to do in the old days is becoming increasingly difficult. What is your feeling currently re email and how it has changed over the past few years?)

More importantly, I had to learn the humbling lesson that no amount of stubborn, brute-force exercise could work around the fact I am flat footed (arch-challenged?), resulting in easily overworked posterior tibial tendons.

As I pushed my weekly distance up, my feet complained more loudly, until I was forced to go back to normal-person-running-shoes.

After a few weeks eating humble pie in running shoes, things are going much better, and I recently did my first short and careful run in sandals.

(Similar to the observation confirmed by the pattern recognition heroine veronikach in her end-of-2018 post, I too ran slower this year in order to run better. I did this for the largest part due to my temporarily busted ankles, but also because more experienced athletes at work recommended heart rate training. For the past few hundreds of kilometres, I have regulated my running speed to try and keep my heart rate within the 75% to 85% of maximum range, mostly ending up closer to 85% than 80%. This has increased the occurrence of those addictive perfect runs, and it has helped to keep my ankles out of trouble.)

In 2019, I would be happy to maintain my 2018 monthly running quota, to remain injury-free, and to maximise my running zen.

(“Running slow” explained above can contribute substantially to the latter two goals.)

I do have an additional concrete (but very humble) running-related resolution for 2019, but I have decided to keep that quiet until it’s in the pocket. :)

It has been two years since the previous EAZ in 2016. The previous experiment coincided with a significant jump in my running performance, the effects of which did not fade away after the end of the experiment.

This time around, the plan is to run EAZ for at least as long as in 2016, but hopefully a few days or weeks longer.

(I should probably call this EA<0.5, as that is what my current favourite “alcohol-free” beer, Devil’s Peak Zero to Hero, claims.)

Most nerds I know have side-projects.

These are the technical artifacts, systems and machines one builds, because one can’t stop building stuff, even after work ends.

Like most nerds, I have a number of these that started with high momentum (new programming language, new tools, new problem, EXCITING! … 3 hours later … NOVELTY COMPLETELY WORN OFF doh.) and are now lying around gathering dust.

Inspired by a colleague who managed to ship a brilliant shooter game side-project on Steam last year, I made myself the promise to ship more side-projects.

After that, I managed to ship two side-projects, one small and the other quite tiny.

This was a satisfying experience that I would like to continue in 2019.

(P.S. the problem with shipping side-projects, is that you now have more things that you actually have to look after. Next year I’ll think up a resolution for unmaintained shipped side-projects.)

This is a simple one.

I used to spend a few minutes every second morning before work doing simple mindfulness breathing and focus exercises.

It was worth the modest time investment many times over, in terms of focus, and especially in terms of seeing life in perspective.

In the second half of 2018 I let this habit slip for some or other reason. I think it’s because I convinced myself that running time could also count as meditation time.

In 2019, I’m going to #bringbackthemeditation.

During 2018, I started taking a more structured approach to the books I wanted to read, and the courses I wanted to follow, by tracking these in my sneaky longer term goals which form part of my daily planning routine.

More structure meant more books read to completion, and more courses followed, resulting in an Ever So Slightly Improved Me.

I am planning to continue and extend this practice in 2019.

The System is Emacs, and orgmode, and multi-scalar note-taking everywhere, and sketching, and daily habits, and a whole bag of tricks to try and keep this creaky old frame moving in the right direction.

Try to grow a tree.

I grew up with a fuerte avocado tree that gave us hundreds of the divine fruit every season. 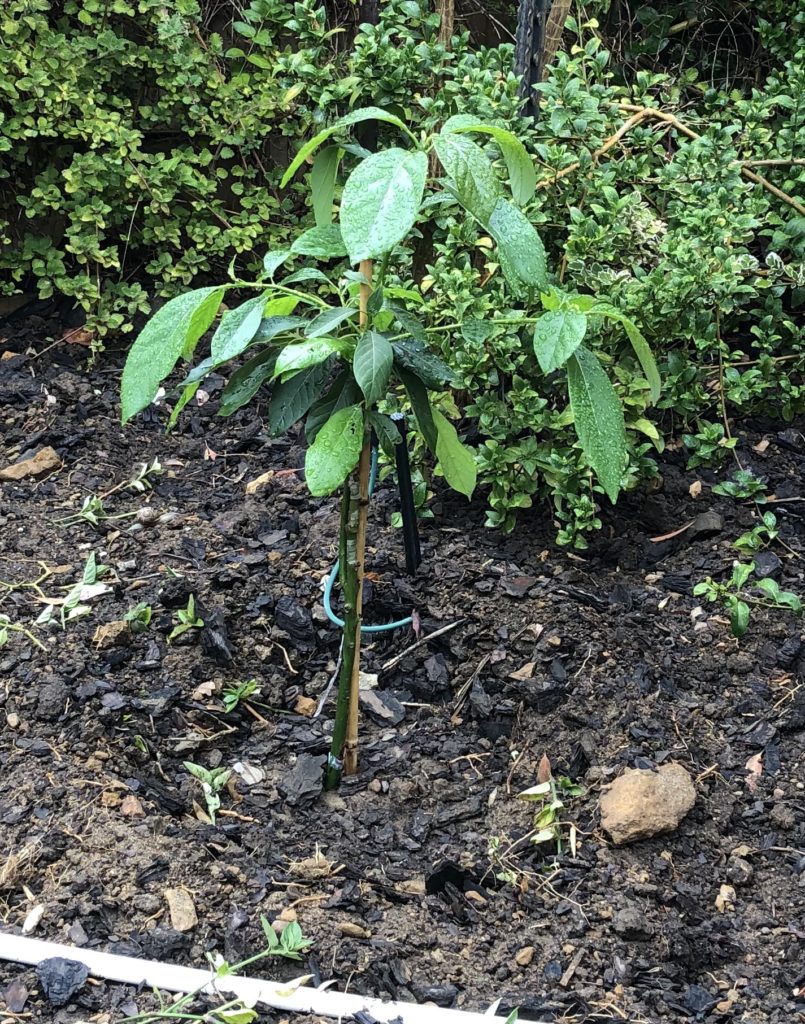 The baby avocado tree, right after we transferred it to its new home, in a little nest of fine compost and bone meal.

We are currently trying to nurture it through its first few weeks of life in our garden.

With the summer sun, and the new environment, it’s a bit touch and go at the moment, but we’re really rooting for that baby tree! (bad pun quota exhausted now?!)

This is it my friends.

You have made it to the end, an endeavour for which I am truly grateful.

I wish you a 2019 filled with growth, health and happiness. 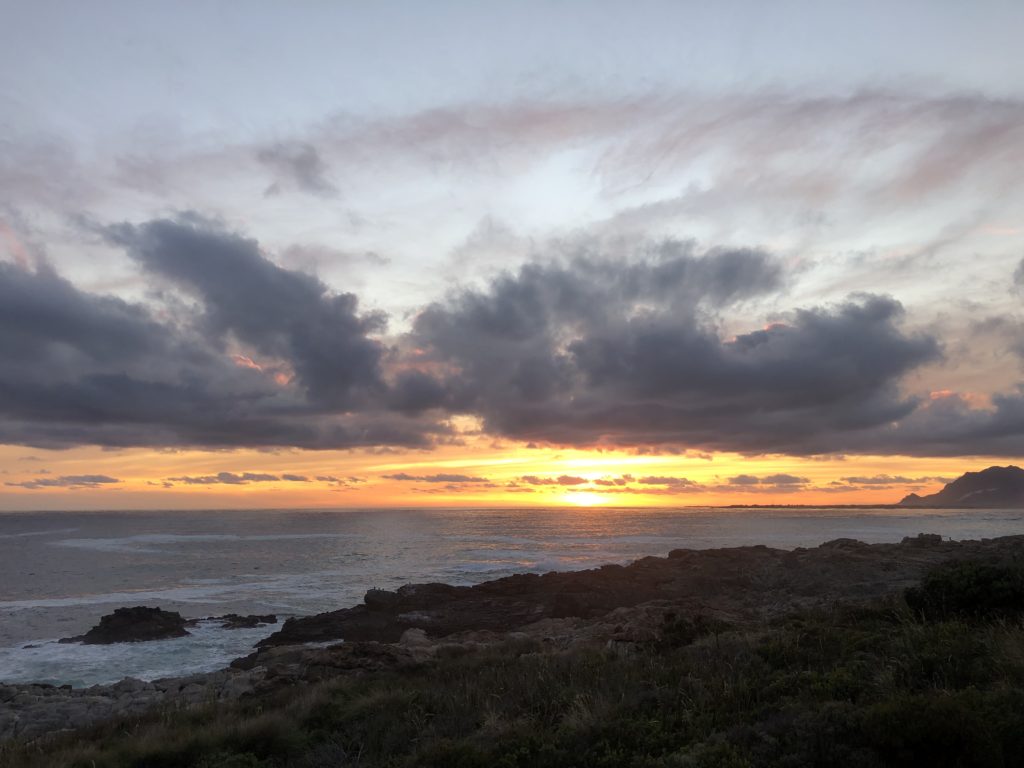 This reminds me of a certain sunset in the Tankwa desert with a rather funny helicopter.