Following the rich tradition over here of year transition posts, having just rounded off a brilliant outdoorsy take-your-mind-off-of-everything vacation with friends, and also inspired by wogan.blog’s nicely personal 2016 review post, I decided that a farewell-2016 how-you-doin’-2017 post was in order.

By the way, by rich tradition I mean that I wrote the grand total of one (1) similarly titled post previously, as the year ticked from 2009 to 2010, and at least one other, disguised as a weekly head voices, as we entered 2012. That last one is worth another read, early 2012 cpbotha had some really good tips. There might be more such posts, this blog has been around for more than 15 years and much of what I’ve written is not available from my short-term memory, which is nice.

Warning: This post is long (1800 words+), rambly and sometimes even a bit mushy. I hope you enjoy it!

The bad, with a hopefully slightly positive outlook at the end

For me the biggest disappointments of 2016 were the double-whammy of the Brexit followed by the Trumpocalypse.

I really did not expect either of these events to go the way they did.

This is probably because I was, ever the optimist, over-estimating the level of human development of British and US voters.

The exclusionist, nationalist, xenophobic and in many cases even white supremacist thinking associated with Trump’s support in the US and the Leave vote in the UK are truly abhorrent.

I understand that there were many other factors at play. However, these voters were either throwing out the baby with the bath water, or, much much  worse, agreeing with the abhorrent sentiments mentioned above. Especially this second possibility depressed me greatly after the US election.

After such setbacks, one needs to look for solutions.

After Brexit, analysis showed that education level was the strongest indicator of a vote for leave or remain. Higher education was strongly associated with remain, whilst the opposite was the case for leave. 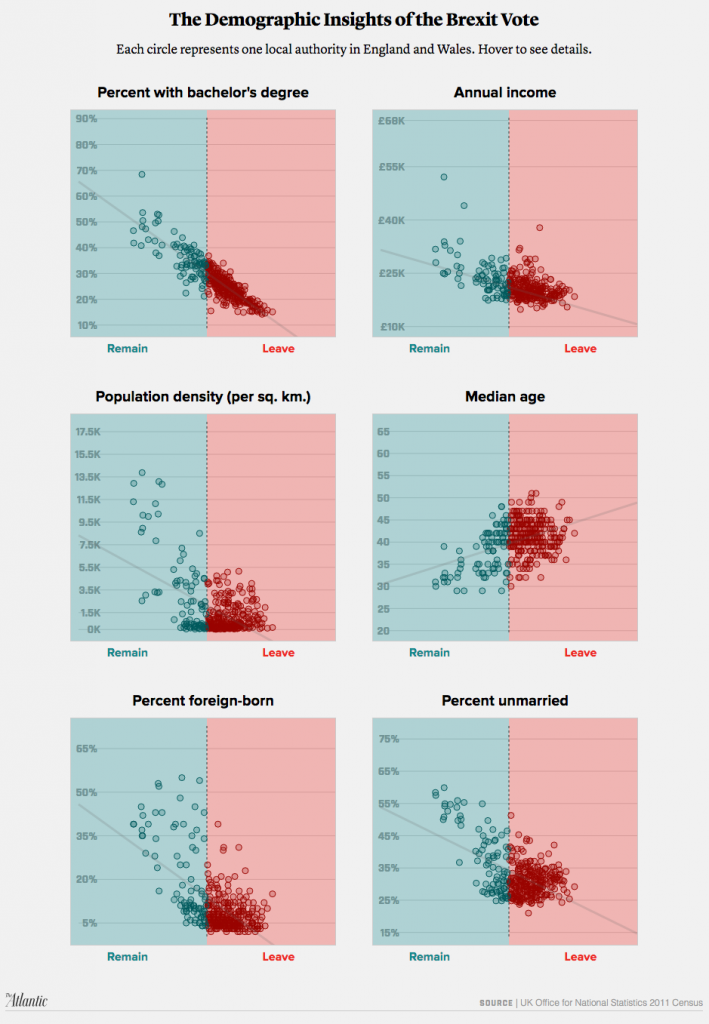 Leave / remain voter analysis by The Atlantic. Click to go to article + interactive version of this graphic.

This is yet another strong indication that we should really be pouring every resource we have into the education of our people. (yes, correlation and causation, I know. hence the terms “strong indication”. discuss in the comments if you like.)

Lawrence M. Krauss, superstar theoretical physicist and author of the book A Universe from Nothing, recently tweeted this 1920 quote by H.G. Wells:

Human history has become, more and more, a race between education and catastrophe.

The way things are going now, that thought, and movements like #feesmustfall, are more important than ever. There can be absolutely no excuse for neglecting the highest quality and accessible education (basic up to tertiary) of future generations of humans whom we expect to further our civilization.

The running and the mindful

During the year, my per-run distance and speed have gradually increased.

Besides fitness gradually increasing, I discovered experimentally that shorter, quicker steps get me further and a higher pace. It took a biomechanical friend to explain to me that this was about muscles operating within the more efficient middle of their full extension/contraction ranges. I could probably just have read this somewhere, but doing it the hard way and then having a friend explain it on top of Table Mountain definitely added something to the experience.

For the last 200 kilometres or so, I have listened to the exact same album: Skin by Flume. Every single run, I start that exact same album with the exact same sequence of tracks. As I learned from the SwimGeek’s blog, finding your soundtrack and putting it on repeat whilst exercising is apparently a thing.

With the surroundings over here being what they are, it does not take much to slip into a state of mindfulness.

No doing, no planning; just absorbing all of the surroundings, physical and mental, the music, and feeling how the meat-based machine that houses me propels us forward.

On the topic of mindfulness, for the last few months I added a repeat event to my todoist, helping me to spend five minutes every morning before work doing the breathing exercise. More recently I do this without any voice track, but previously Prof. Mark Williams at one point would say (original quote is due to Jon Kabat-Zinn, PhD):

Each breath a new beginning; each out-breath a letting go.

There’s a whole lot in there. I have spent quite some time with it and I am far from done.

The first rule of blogging: You don’t blog about blogging.

However, I hope you don’t mind me breaking that rule to mention that in 2016, this blog was viewed 133 thousand times. I already get happy when one other person reads a post. You can imagine how happy it makes me to know that there are even slightly more people who have come here to consume some of the words I have written, and even some who have taken the time to leave behind comments!

The lion’s share of those views were due to focused posts that got picked up by some of the more popular nerd sites. I have to admit that I derived the most enjoyment from the more personal posts that were only read by friends.

Whatever the case may be, this has to be my most satisfying hobby. Thank you for the crucial role that you who read play in it!

In early(ish) 2016, our third daughter, affectionately known as Genetic Offspring Unit #3 (GOU#3 for short) around these parts, was born.

This wonderful little cellular mega-cluster is currently making noises that have the primary purpose of being immensely cute, but are also slowly starting to make sense. Her ambulation capabilities have increased immensely, and she is on the verge of standing up by herself and so we will probably have to re-arrange our interior. Again.

Long ago, I wrote here about my unexpected new role as someone else’s Tooth Fairy. In the meantime, working as a part-time tooth fairy and a full-time papa to three little humans has turned out to be a more fulfilling career than I ever could have imagined.

I prefer making resolutions in secret, then carrying them out or not, and only then reporting on them. However, that would mean that I would have to wrap up this post right now, and for that I’m not quite ready yet.

One resolution that I am already executing on, is performing an interesting little experiment. After reading about the effects of alcohol on one’s (running) performance and general energy levels, I have decided to go for 30 days without a drop of alcohol to try and get a subjective idea of its potential impact.

Those of you who have spent more than 8 seconds in my or my blog’s vicinity know that I absolutely adore craft beer (this includes local, but also special beers of the Belgian type) and local wines, both of which are regularly consumed by me and “business partners” during “business lunches” in the not-unattractive local surroundings.

This decision was not taken lightly.

It is mid-morning of day 2 of Experiment Alcohol Zero (EAZ) as I write this. With the air full of smoke due to local vegetation fires, I have not been able to go running yet, but I am imagining that my energy lasted later last night, and I got up easier this morning. I have 29 more days to investigate.

Reminders for a hopefully better life

Every day, I remind myself to be the kindest I can possibly be to everyone I come into contact with. We have infinite amounts of kindness to spread.

I also remind myself to be grateful. It takes continuous practice to identify the many things one can be grateful for every day, but it is definitely worth it.

I often remind GOU#1 (#2 and #3 are not old enough yet for this lesson) that, besides the guidelines above, we have to keep on working on two more related characteristics: being useful, and being likable.

Being useful means continuously developing and refining skills that enable one to contribute value to one’s surroundings. Being likable means understanding and appreciating how we humans stick together. Kindness, see above, is an important component of this.

Rapidly morphing goalposts jumping randomly through even more randomly pulsating hyperspace, with a slightly positive outlook at the end

Yes folks, this is going to be my parting thought.

When I was much younger, I used to believe that one’s life could be “cracked”. That is, if you searched, and you worked really hard at understanding yourself, your people and your surroundings, you could come up with some kind of answer with which you would be able to attain contentment.

In the meantime I’ve come to the realisation that that Much Younger Me, although quite dashing, was of course utterly wrong.

The goal posts are not just moving all the time, they are an illusion flashing in and out of an hallucinogenic and especially dynamic perception.

One trick to help one deal with this, is to stop thinking about goals in the first place, and instead consider the directions of your movement.

Also keep in mind that there are no answers, only choices. You work to make the best ones you can with the means at your disposal at that moment.

Importantly, in this restless environment, some peace can be found by realising that a large part of the restlessness originates from within you. Fortunately, you have slightly more say in you than you have in your surroundings.

What one can do then, is nicely summarised by Prof. Mark Williams in the audio accompanying his mindfulness book:

The deep stillness we seek does not arise because the world is still or the mind is quiet. Stillness is nourished when we allow things to be just as they are for now, in this moment, moment by moment and breath by breath.

The End (for now)

Alright friends, that was it from me, for now. I hope that you have the best 2017 possible. I hope especially that your kindness and that of those around you flows deeply and freely.

As a parting gift, here is the high-resolution panoroma I made from the top of Table Mountain, after hiking up Platteklip Gorge with friends:

The view from the top of Table Mountain, photo by cpbotha.net. Click for high-res.