(With this edition of the WHV, I’m looking back through exceptionally forgetful lenses at the period of time spanning from Wednesday November 9 to Sunday December 4, 2016.)

This post has been lying around in draft form since Sunday November 20. However, two of the bullet points I was planning to mention, one making the case for preferring short-form blogging over twitter and the other lamenting the sorry state of security on the Android operating system, somehow grew spontaneously into blog posts and then managed to make their way onto the Hacker News frontpage and various other high-traffic aggregators.

Those of you who know me a little bit, know of my strange little hobby: Getting my blog posts onto the HN frontpage. Anyways, it was a glorious week, and a very good month for this blog.

THANK YOU MANY VISITORS FOR ALL OF THE HAPPINESS YOU HAVE SUPPLIED! I TRY TO SPREAD IT AS MUCH AS I CAN!

(At the top of the right sidebar, you can make me really happy by entering your email address to be added to a shiny new weekly blog update email. Every Wednesday you’ll receive an email containing all the posts of the week up to then, saving you time and money! The old email-as-I-post list will also be maintained, but I wanted to offer more options for subscribers.)

Ghost in the Shell

Back in the day, I watched the original Ghost in the Shell anime about 102 times. For a time (picture the 90s somewhere, I’m dressed like Sonny Crockett in Miami Vice, except with really long hair, and utterly metal), the SO and I were seriously planning to use the brilliant GiTS theme song instead of the wedding march. You know, this one:

We ended up doing the wedding march because reasons. (The 90s had enough issues as it was.)

Anyways, fast forward a decade or two and a new trailer for the Ghost in the Shell Trailer live action movie has been released. I can’t help but be very excited about this. Listen, they even put some Depeche Mode in there!

Devil on my arm

(This heading should remind some of you of a certain teenage science fiction dystopian novel of the 80s. Picture me with leg warmers and a head band, exercising to a Jane Fonda VHS cassette, but with long hair and utterly metal.)

That terrible running addiction (it’s not a terrible addiction, but my running itself is terrible, doh.) I mentioned last time conspired with a local daily deal campaign to make me acquire a Samsung Gear Fit 2. This is a rather snazzy-looking (for running watches that is, the bar is not very high) timepiece with a beautiful OLED colour touch-screen, and sporting a 1 GHz CPU, 512GB RAM, 4GB of flash, a GPS, and some apps, including an MP3 player. 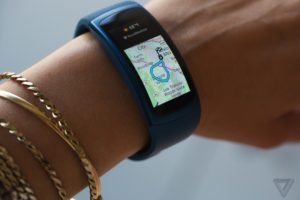 That’s the Gear Fit 2 on my arm. I wear many golden bangles when I go running.

All of this means that I can go running without my smartphone and still get full geo-located stats on my terribleness. The gadget has a suitably terrible robotic synthesised voice that encourages me, without any noticeable feeling, uttering the words  when I am close to the end of my route. Brilliant.

More importantly, this also means that we can have a really good giggle at the cpbotha of 2003, who wrote in a post about his new Tungsten E PDA:

If I had known 15 years ago that I would one day walk around carrying a cigarette-tin sized computer with a 126MHz CPU, a total of 160MB ram and a colour screen, I would probably have gone orbital.

13 years later, and my watch would karate chop my old PDA into orbit, if it were still around. I’m really curious in what way we’ll be laughing at me (again) in 13 years time. That is, if the Ayn Rand readers / white supremacists don’t screw everything up for us all before then. :(

This is the bit where I post carefully selected photos so that you think my life is infinitely better than it actually is.

This is a practical example of what happens when you (deliberately) don’t listen to Uncle Nyquist. My life is filled with ups and downs, and a great deal of flattish bits. Whatever the case may be, I do try to optimise as much as possible for the good bits. Part of this is dwelling on them for a little bit longer, like this:

“Post-truth” was named word of the year by Oxford Dictionaries. As if we don’t have enough problems in the world today, it seems that we are now in the post-truth era. Apparently objective facts have become less influential in shaping public opinion than appeals to emotion and personal belief.

Somewhere in the future, when we’ve all calmed down a bit, I would like to try and analyse how this could have happened, and what can be done to try and fix it. (My money is on 100% accessible education for ALL (people who can afford it pay, people who can’t, don’t. Really not that complicated.)**. **My money seems to be standing together with the statistics on Brexit and Trump voters. This is obviously completely lost on Brexit and Trump voters. OH THE IRONY.)

Anyways, until that future time when we’ll have that mature discussion about these matters, I leave you with this: 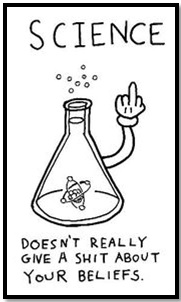 This is what I think of “post-truth”