(There is also a Russian language version of this post available, translated and published by SoftDroid on 2017-04-12.)

I love that by following certain people, my timeline has become a stream of interesting and entertaining information. I love that sometimes I am able to fit my little publication just so into the 140 characters given to me. I found The Trumpocalypse truly depressing, but the joke tweets were golden: 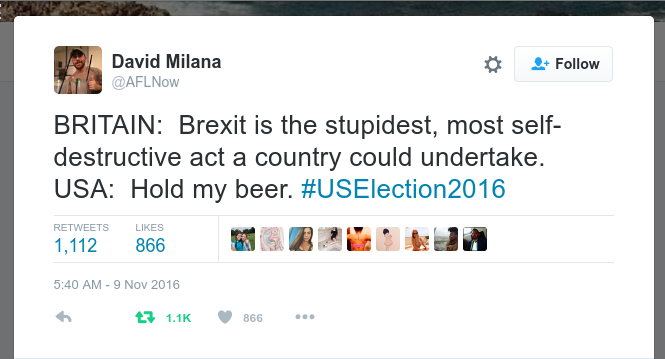 I love that Twitter is so widely accessible and utilised. For example here in South Africa, if you make a small effort, you can get great, grassroots-level inputs from all corners of our political spectrum. This has helped me tremendously to try and understand our complicated environment a little better.

I really don’t like that we are all putting our content, including those golden joke tweets, into someone else’s silo. You’re giving Twitter full control over all of your content. That’s a huge price to pay for the exposure, especially in the light of the fact that there are user-controlled alternatives.

Also, with Twitter’s commercial survival often being debated, can we really trust this budding public service (it has become that central) with our public history?

Far more importantly, Twitter is doing a really bad job at keeping abusive users and abuse out of the system. Users have very little power against abusive groups. There have been a great number of cases when users were forced to leave Twitter, in effect being muzzled, due to direct and concerted abuse.

This can’t be right.

Yes, I think we can.

Blogs and RSS, the latter a system for subscribing to a collection of blogs, and being able to read their posts in a single chronological stream, almost exactly like Twitter, have been around forever.

Setting up a blog at for example WordPress.com is not much more complicated than creating a new Twitter account. Readers can subscribe to your blog using any number of apps, for example the WordPress.com Reader or any other so-called aggregator, such as Inoreader or Feedly. Your list of subscriptions can be freely exported from one aggregator and imported into another.

Instead of posting your 140 character masterpiece via the Twitter app, you would do so via the WordPress app. You can write short tweets, or long essays, with as much embedded media and with as much typesetting as you like.

By default, you have to moderate (approve or deny) comments on any of your posts. Bye-bye abusive users. In fact, you’re able to muzzle them, which is how it should be. This is your content and your voice after all. However, they are also free to start their own blogs of course. Everyone else is free never to go there.

Furthermore, your content can be easily exported into a self-hosted blog (using the open source wordpress.org software), such as this one, where you truly control the whole system. In all cases, the content is yours to do with as you please.

What needs to happen?

It looks like all the components of the solution have been right here all along.

However, to become as accessible as Twitter, they definitely require some polish (this used to be “a little polish”, but commenter AJ made valid points) .

If for example the WordPress app became as straight-forward as the Twitter app, for setting up a new blog, for posting and for reading all of your followed blogs, that would be great.

If the WordPress app, or any alternative, could come up with a streamlined user story for the posting of short (approximately 140 characters maybe?! :) snippets, that would be even better. (If you did not know about post formats yet, check them out. For exmample, the “aside” post format is a way to post a short title-less snippet to your blog.)

Furthermore, we definitely need a good discovery platform. This is the thing where Twitter will recommend new accounts to follow based on your existing subscriptions. WordPress does something similar, but it has to be much more discoverable.

In the coming weeks, I will be running a little experiment by trying to post even my short, previously twitter-only blurbs to this blog. I will have to cross-tweet these, but at least the primary source will be right here in my own database.

What do you think? Is this possible? Is it something you would like?