It feels like this post took even longer than usual to get “done”. I think it might have to do with me breaking it up into several early morning writing sessions, which resulted in two partially formed blog posts compressing themselves quite inelegantly into this edition.

I will try to do better next time.

Anyways, the rest consists of a nerd part (which you could skip if you’re not interested in nerds or their things, but then you would miss the part where I explain why you should be using Signal instead of WhatsApp), followed by a story about conversations with strangers.

A reminder to mix up your messaging life with some privacy 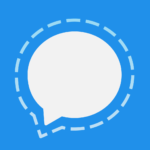 That’s a pretty serious chunk of the world population.

There’s nothing else that even comes close.

In order to communicate with the largest subset of friends and contacts, I need WhatsApp. In order to participate in school and neighbourhood groups, or to coordinate with service providers (pretty darned useful that), I have no choice but to use WhatsApp.

Unless some enormous calamity strikes, I don’t think that this is not going to change any time soon.

In January of this year, The New York Times reported that Facebook was planning to merge the underlying technical infrastructure of WhatsApp, Instagram and Facebook Messenger.

Although this will result in users being able to cross-message between WhatsApp, Insta (I’m not a user, I just heard hipster kids calling it this) and Facebook Messenger, which is great, it will also enable the Facebook mothership to monitor very closely who connects with whom across all three networks.

Think about this: Facebook will be able to analyse, across all three of these giant networks, who interacts with whom and when, and sometimes in which way, and will be able to build an even more detailed and powerful social network than they have already done.

If we do nothing, everyone else will just keep on keeping everyone else on WhatsApp. This circular logic is extremely hard to beat.

If we’re even slightly concerned (ok, new we’re down to about 12 people, 5 of which read this blog), what can we do about this?

Install Signal on your phone, and use that whenever you can. (I started nagging about this in early 2016.)

Signal is one of the most secure and private messaging apps available. Importantly, there’s no company behind it that wants to mine your data for whatever reason.

Sure, you can keep on arguing that no-one else is on Signal. However, I’m here, and you can message me.

Once you install it in addition to the incumbents, you then have a great opportunity of becoming the token Signal user in your social sub-network who by the sheer power of nag-itude gets one or two of your friends to join this small but valuable network.

Whatever we can do to redirect a fraction of the world’s messaging traffic away from the Facebook behemoth is a worthwhile endeavour.

Visual Studio Code is evolving at a terrific pace

I am the guy who got Microsoft’s Python Language Server working with the existing LSP support in Emacs, and then very fortunately two different open source projects ran with it. However, it seems like there are whole armies of programmers working on Visual Studio Code and its Python extension, which sometimes makes this feel like a micro-example of (a slightly wonky) cathedral and the bazaar.

In any case, where I used to fall back to Emacs for smaller Python projects where it wasn’t worth it firing up the PyCharm machinery, I now often reach for Visual Studio Code, which in a growing number of cases is even able to go toe-to-toe with PyCharm.

For years now I’ve been using either fasd or more recently autojump (because it installs on macOS with a one-liner more or less) to jump really quickly between recently visited directories in the shell.

However, in a stunning case of there-really-is-always-room-for-one-more-solution-to-the-same-problem, I ran into z.lua, a command-line directory jumper programmed in Lua (which I’ve always had a thing for), which is also many times faster than fasd or autojump.

Now, I simply do z blog to jump to the most frecent (frequent and recent you plebs) directory containing the word “blog”, or zf tele to show me a selectable list of the directories I’ve frecently visited containing the sub-word “tele”.

(Here’s a bonus pro-tip for macOS users: If you don’t mind scripting in Lua, hammerspoon is an amazing desktop open source automation tool. It is the spiritual successor to Mjolnir (hence its name), which you can use to script any number of shortcut-associated desktop tricks. I for example have code to resize any window to a relative portion of the current desktop, and to stick that window neatly into a specific quadrant or half of the desktop. This meant I could remove Spectacle from my machine.)

Thanks to lady luck, or perhaps thanks to serendipity engineering (hat tip to traveller tzhau), I have had the pleasure of some utterly unexpected but pretty epic conversations, with strangers, over the years.

(The secret is that you have to plug in to the conversation apparatus of a stranger. Just remember to configure the communication protocol to hallucin-8. No I don’t mean that you should go on a trip together. This just refers to the ancient mechanism of being able to experience vividly another’s reality via your real-time multi-sensory imagination, synchronised via the primitive but reliable speech signal.)

For example, back in WHV #84 I wrote about the fellow eternal foreigner I met at a weekend party (weekend parties are the best), who taught me the trick of applying gratefulness generously and continously.

One of the more epic conversations I never wrote about, is the two fellow travellers I met on the Final Flight back to South Africa after our brilliant Dutch adventure.

These were some of the darkest times of my recent life.

I had just watched for three days as our home was being hollowed out by the movers, until it was just an empty shell.

During that time, I slept in that empty shell, with the ever-increasing echoes of even the smallest sounds doing quite effectively the exact opposite of buoying my mood.

Spending some of these final few days with some of my best friends was truly bitter sweet.

By the time I entered the plane back to Cape Town, I was lower than I had been in a very long time.

My cunning plan at that point was to have a truly depressing flight, but fate had conspired to put me in row 44, where I found myself next to CL and CS.

I can’t remember exactly how the process started, but before I knew it we were embroiled in a solid 11+ hours of continuous and life-affirming conversation.

Besides the differences between us that made the cross-exploration that much more interesting, meeting someone on a plane usually has no to very few implications for later, so one is somehow even more free to open up and connect. In that sense, this is reminiscent of the conversations I’ve gotten involved in at AB.

(In this case, that assumption was proven wrong by pretty serious post-flight collaborations. If you’re reading this CS, thank you for that also!)

At a more recent weekend party (remember they are the best) I again found myself involved in a pretty intense conversation with a stranger.

Again, this stranger had wisdom to share, a tidbit of which I would like to reproduce here.

He referred to this guideline as not negotiating with the self.

If you’re like me, you are now making your “Huh?” face.

His example was about going to the gym, or rather, future him coming up with all kinds of excuses for not going. His rule was that in these cases future him had to go and, without any exception (there’s the non-negotation clause), complete the exercise bike session. Only then, if future him at that point still really did not want to go, was there the possibility of calling it quits.

This feels similar to what I’m trying to do with my checklists.

When I’m thinking about ways to live better, I am by definition in my rider-on-elephant state. It makes a whole lot of sense to use this time to lay reverse-traps for future me in my tired elephant-running-loose state.

The underlying idea is for Super-You to design systems, e.g. checklists, non-negotiable and easy-to-follow rules, and fully formed habits, that help Normal-Low-Energy-You to keep on functioning as well as possible.

A message from our sponsor Socrates

For edition #6431 of Really Abrupt and Sometimes Jarring WHV endings(tm) I shall end with a quote. I recently ran into this famous dictum by Socrates which I definitely resonate with:

The unexamined life is not worth living

Have a brilliant week kids!