I converted our one telemedicine product from virtualenv and requirements files to pipenv. Much has been said about pipenv, also in various dramatic contexts, but there is not much competition when it comes to reproducible builds of Python applications.

It’s interesting how wrapping up something relatively straight-forward like this (it’s the carpentry or plumbing parts of software engineering, one could say) can result in a fairly high level of satisfaction by the end of the work day.

Friday’s barefoot run on the beach was nothing short of epically enjoyable. Just a slight breeze, sun out but not too warm, goldilocks sand to run on and a ripe banana, entered into the system just before the run, contributing what felt like bundles of energy until the very end.

On Saturday, GOU#2 and I (middle-children UNITE!) joined friends in Vermont (coastal village right next to Onrus, another coastal village) where I prepared for everyone present version 3.0 of “my” curry potjie.

There’s something very special to the ritual of slowly (in this case three hours and a bit) but very deliberately preparing food for your friends. The fact that a large chunk of it happens on a wood fire adds even more flavour to the experience.

Sunday started with a run on the coastal path from Vermont to Onrus, under perfect blue skies (see photo above).

Later that morning, we spent some time at the Onrus lagoon, in and around which I spent a large number of happy hours growing up. It was amazing being able to show GOU#2 around, and then seeing her playing in the same waters.

All packed up and on our way home, we decided to visit M and A, one of two aunt-uncle pairs who live in Onrus.

GOU#2, age 9, did an amazing job of focusing on the stories my aunt had to tell, and reciprocating with curiosity and questions. (I told her afterwards that I was proud of her, also for this.)

At one point, my aunt explained, almost apologetically, that their world had become really small.

They were able to go down to the beach and spend hours looking at the sea and at the people walking by.

I thought that this was such a humble way for them to articulate their growing perceptual ability to sense the whole universes of experience hiding away in all of the seemingly small moments making up the average day.

This was yet another great tip from LM: If you need to digitise and old photo or two, try the Google PhotoScan app.

Using your smartphone, you start by making one overview photo of your old print, and then the app guides you with four white filled discs to make four rapid shots of the corners.

A whole bunch of Google image processing magic ensues, and out pops a glare-corrected perfectly cropped version of the photo!

Below you can see a test with a photo taken in 1993. The flash glare on the door was real. 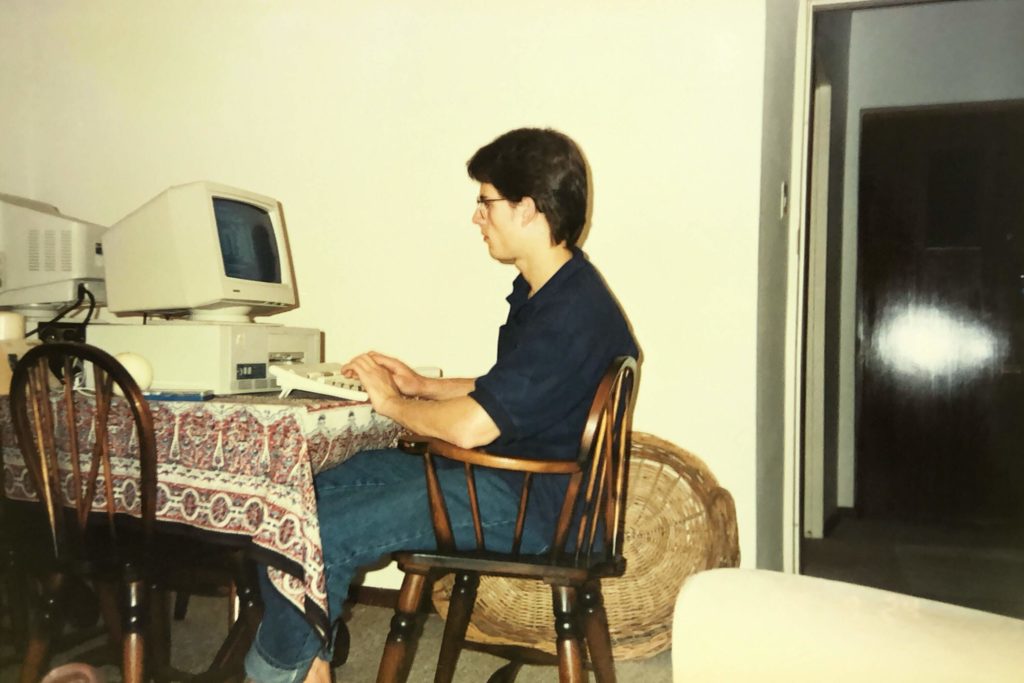 Main container and conduit of the weekly head voices, 25 years ago. If memory serves correctly, I was making (in x86 assembly language) a software tool to play Amiga Mod Music files. My implementation was one of the fastest on the block, as I was prone to 1) counting and minimising the clock cycles in my routines and 2) employing self-modifying code in order to shave off even more unnecessary conditionals. (I overwrote memory areas with the specific sound rendering implementation for the selected output device. Modern caching architectures would probably not like this very much.)

It’s already Saturday February 23 as I write these hopefully almost final words of this post.

The plan was to make a super humble and compact bullet-list WHV, but then the week got super busy, and then I realised (again…) that I am truly terrible at bullet lists. (Please remind me when you see me again.)

What I am happy about, is that it’s now here for you to read.