Signal, the open source messaging and voice calling app that does end-to-end encryption.

The whole world is using WhatsApp to message each other. I often do too, because I want to inter-operate with the rest of the world.

Although Facebook has promised otherwise, the temptation to link all of your WhatsApp messages with Facebook logins (a straight-forward process, as they have the mobile phone numbers of a great number of their users) must be quite tempting to the people at Facebook. Imagine how well they would then be able to target their advertising, based on their access to both your Facebook profile and your private WhatsApp messages!

Fortunately, we now have an open source app, called Signal (available on Android, IOS and the desktop), which performs end-to-end encryption on all messages and voice calls that go through it. This means that absolutely no-one is able to read your messages or eavesdrop on your voice calls, except the intended recipients.

My request is that you get your contacts to install and start using Signal instead of WhatsApp wherever possible. At the very least some of our messages will not be accessible to various large corporations and any other prying eyes. If the security argument is not enough for you, there is one more extremely important topic: Signal handles animated gifs better than WhatsApp, at least on Android. (Telegram supports them on both Android on IOS, but it is by default less secure than Signal). See here the results of my experiments: 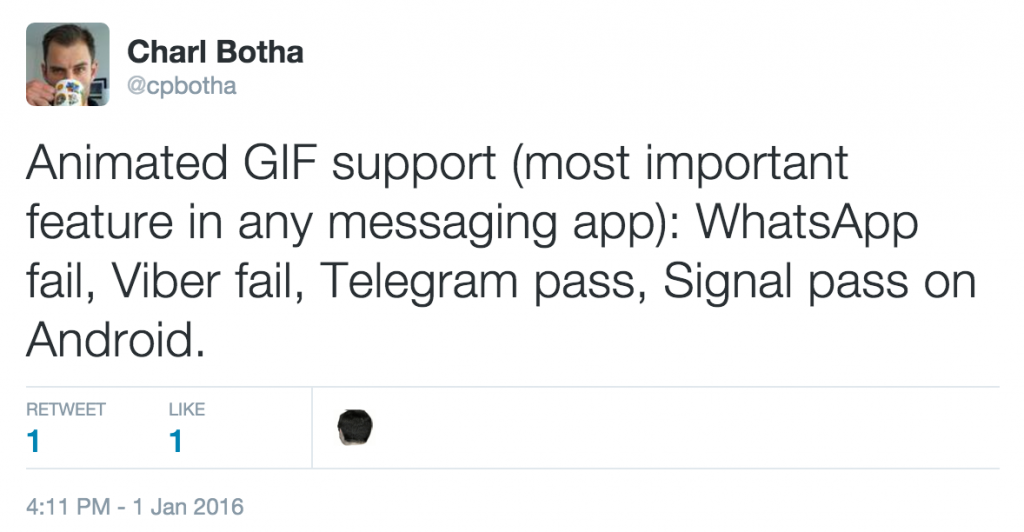 On August 25, 2016, The Verge reported that WhatsApp will now officially begin sharing data with Facebook. They will indeed link up telephone numbers and social networks, meaning that both parties will get a tremendous boost in what they know about you. I don’t want to say I told you so, but I told you so. ;)