That’s how the African sun sets in Mpumalanga. 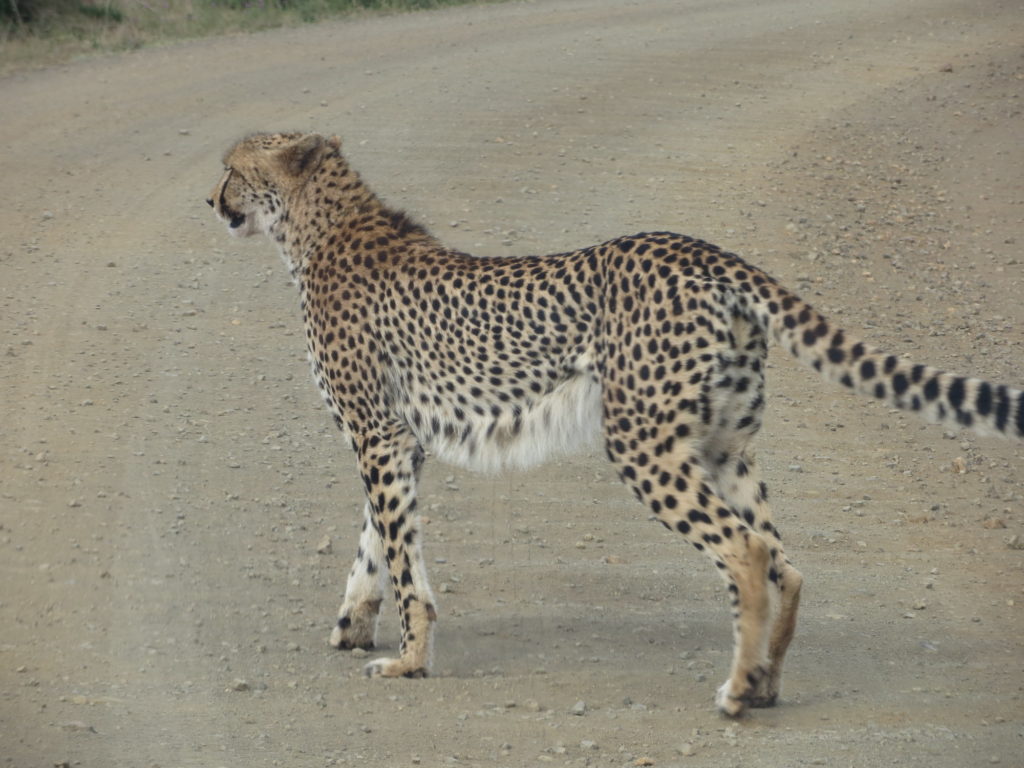 … and this is more or less what it looks like when a cheetah decides to grace you with its presence. We had it all to ourselves (this is quite unusual in the Kruger National Park with an animal of this level of celebrity) and were able to follow it until it wandered further away from the road, probably on the lookout for some dinner.

It was a brilliant week-long getaway with the newest little member of the family. The time is just long enough to allow for a complete switch-off (see the “you are turning into a cyborg” section of one of the previous KNP posts) with the balmy weather and the wild animal tracking just adding to the fun.

On the nerd front, I convinced my employer to get me a new Microsoft Sculpt Ergonomic desktop. As I spend 8 hours or more monkey-typing on some sort of keyboard every day, having one that works well is quite important. I might have found a new favourite in the Sculpt Ergonomic. It looks like this:

It’s probably the most strangely shaped keyboard I have ever worked on, but it has grown on me quite quickly. The strange shape helps keep my arms and wrists in an even better posture than with the Comfort Curve 3000 (my previous favourite), and the chiclet keys combine just the right amounts of finger travel economy and tactile feedback in my opinion. My only gripe is that the escape key, which as Emacs user I quite often use, is smaller than the other keys and has a completely different feel.

(An extremely brief final aside on the nerd front: I briefly tried Evernote again as my current note-taking strategy does not support a good web-clipper, and my all-singing all-dancing non-linear knowledge management prototype, now in its seventh complete rewrite, is not ready yet. They’ve updated the Evernote look, but even with 5 or 6 clipped web pages in total in my database, I had trouble getting the android app to sync up with the web version.)

During my compulsive daily RSS feed / twitter / Google+ reading, I came across this interesting summary of recent research on changes in the aging brain. It’s the type of article that interests one especially when one is in possession of such an aging brain, and perhaps also when it reflects one’s own experiences, all completely hypothetically of course.

In any case, in yet another one of those examples of youth being wasted on the young it’s long been known that your brain is at its maximum processing capacity and speed during one’s early twenties. In my early twenties, the last thing I was thinking about was my mental performance peaking. It’s a sobering counterpoint that my brain’s processing speed has been steadily declining since my late twenties.

As a sort of a consolation prize, it is starting to look like our brains, when we succeed in keeping them healthy, develop more balanced patterns of activity as we get older. We work smarter rather than harder, unlike those twenty year olds who refuse to get off my lawn.

The article mentions the hypothesis that there might be something that could be called the neuro-circuitry of wisdom, consisting of _the dorsolateral prefrontal cortex (responsible for rationality, discipline, and self-preservation), the ventromedial prefrontal cortex (associated with “kind, supportive, social, and emotional behavior needed for survival of species”), the anterior cingulate (which mediates conflicts between parts of the prefrontal cortex), and the striatum with amygdala (part of the reward circuitry) _. With age, brain activity between all of these regions reaches a sort of balance, leading to the owner of said brain demonstrating feats of wisdom which will probably be witnessed by exactly no-one, almost like trees falling in the forest, or almost like the posts on this blog, minus the wisdom.

Here’s to hoping that, as we all near our inevitable final sunsets, we do in fact become ever so slightly wiser, and ever so slightly more capable of contributing peace and kindness to our surroundings; even, or perhaps especially, when no-one is watching.

(I just reminded me of Reggie Watts… see below.)