WELL HELLO THERE FRIENDS FROM THE BLOGOSPHERE!

It’s definitely time to get out a Weekly Head Voices, so that we can all feel nicely up to date. This post covers the period from Monday December 5, 2016 to Sunday January 15, 2017, which is ever so slightly *cough* later than average.

My excuse is: SUMMER HOLIDAY.

If you have not yet read my 2016 to 2017 transition post, this is a gentle reminder to make some time to do so. There’s some backyard philosophy in that post that you might find useful.

(The main reason for writing this post is to satisfy my NO-GAPS-BETWEEN-WEEKLY-HEAD-VOICES-DAMNIT OCD. I’ve added pretty pictures to help us get through it.

Below is a photo I have quite surprisingly titled “A scene with a beach, the sea and some fluffy clouds in the brilliant blue sky”. The photo was taken on the beach at Boggomsbaai, a really small sea-side village on the East coast where we spent the first few days of our holiday.

Up ahead you can see the bustling metropole (well, it has one really expensive minimarket and an impressive gate) of Vleesbaai. 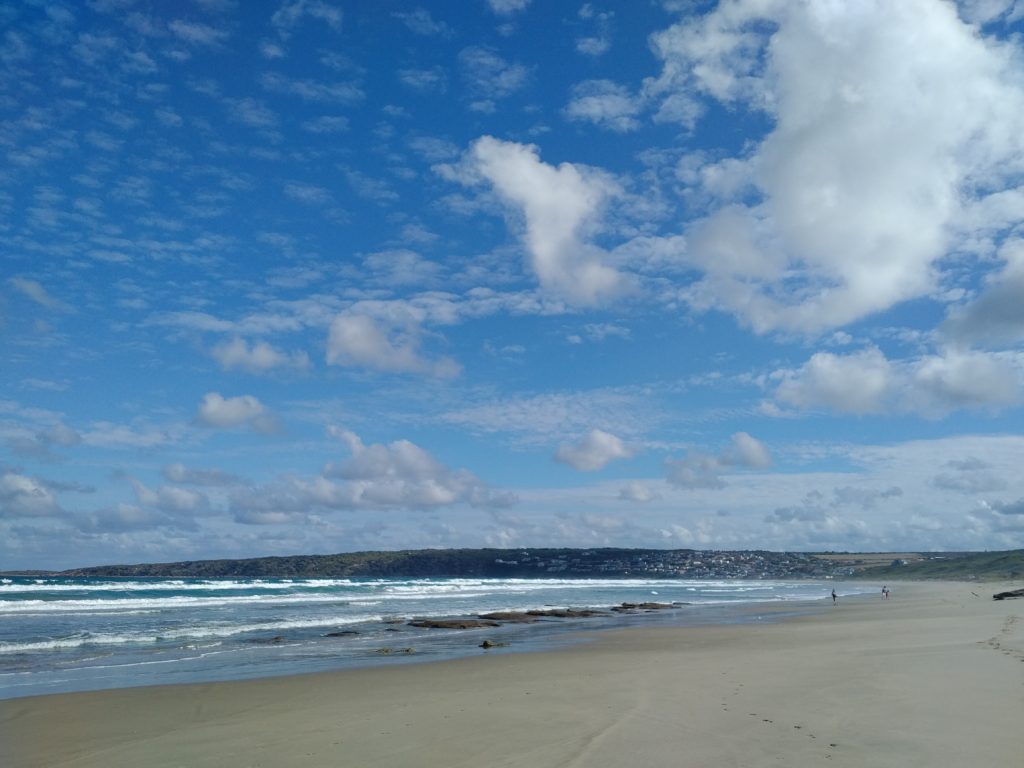 Boggomsbaai beach. Vleesbaai in the distance. This is a really lovely run.

After the truly disappointing final death of my Awei bluetooth headphones whilst running on that very beach, I acquired the Samsung Level Link, a tiny bluetooth transceiver which can turn any old set of cheap wired earphones into bluetooth earphones! It looks like this: 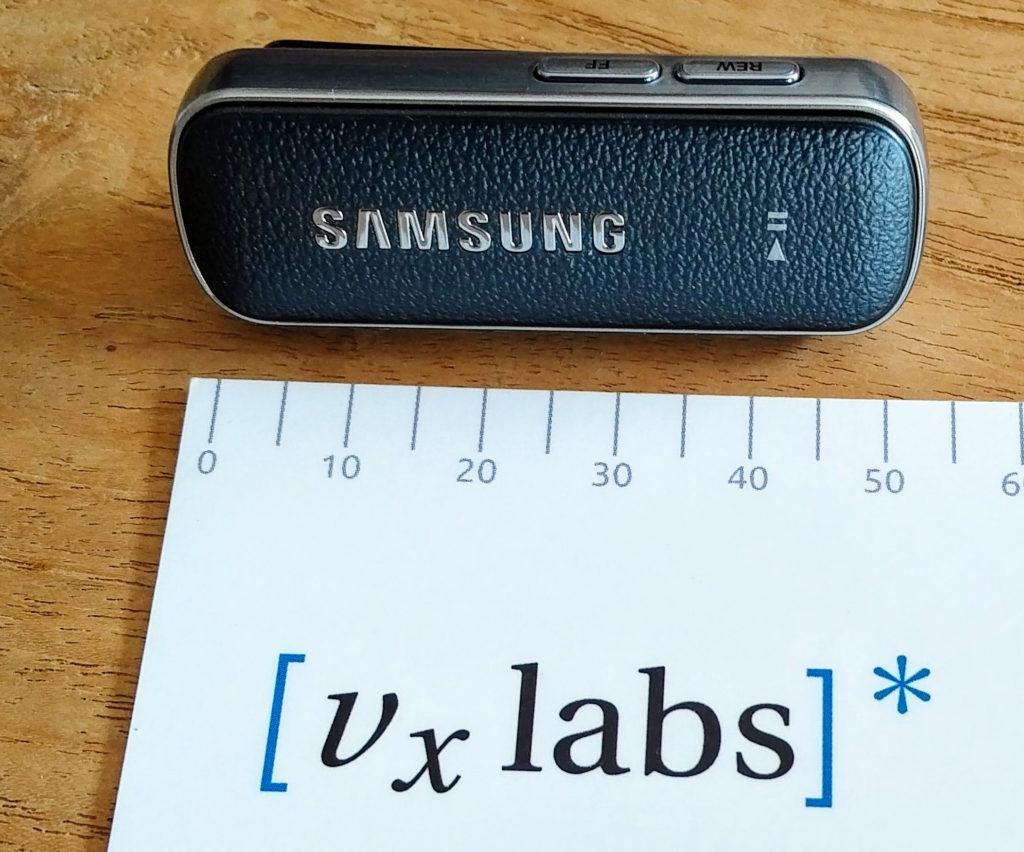 After five or six runs with this device of trouble-free music listening whilst running (Flume’s Skin was the business until recently, but I’ve just switched to the Tron Legacy soundtrack by Daft Punk which I’m enjoying, although I’m missing some of the Underworld-esque dancing in the summer afternoon sunset feels; THEM FEELS), the Head Voices Review (we’re baaaa-aaaaack!) is currently considering the following initial review:

Shortly before Christmas, some of our Dutch besties arrived for a good old fashioned swap-the-Dutch-winter-for-some-guilt-free-South-African-summer shenanigans.

It’s a treat being able to show visitors from our other home around our old and now new again home. This often makes me do things which I should have done a long time ago but kept on postponing due to less important matters getting in the way.

One such thing is taking surfing lessons.

Funny thing is, there’s a brilliant surfing school (Son in Strand, in case you were wondering) which is just a 15 minute drive away.

Our instructor was fabulous, and we are now all surfers as you can see:

You can see by my hands doing a strange mix of sign of the horns and the shaka sign that I still have too much metal in me. Faces of the innocent have been evil-ised. Windowlicker. Respect it.

Another favourite local pastime is getting high with friends. Below is a picture of one such occasion. We were only moderately high, in preparation for another planned expedition described further down, but the views were beautiful nonetheless. 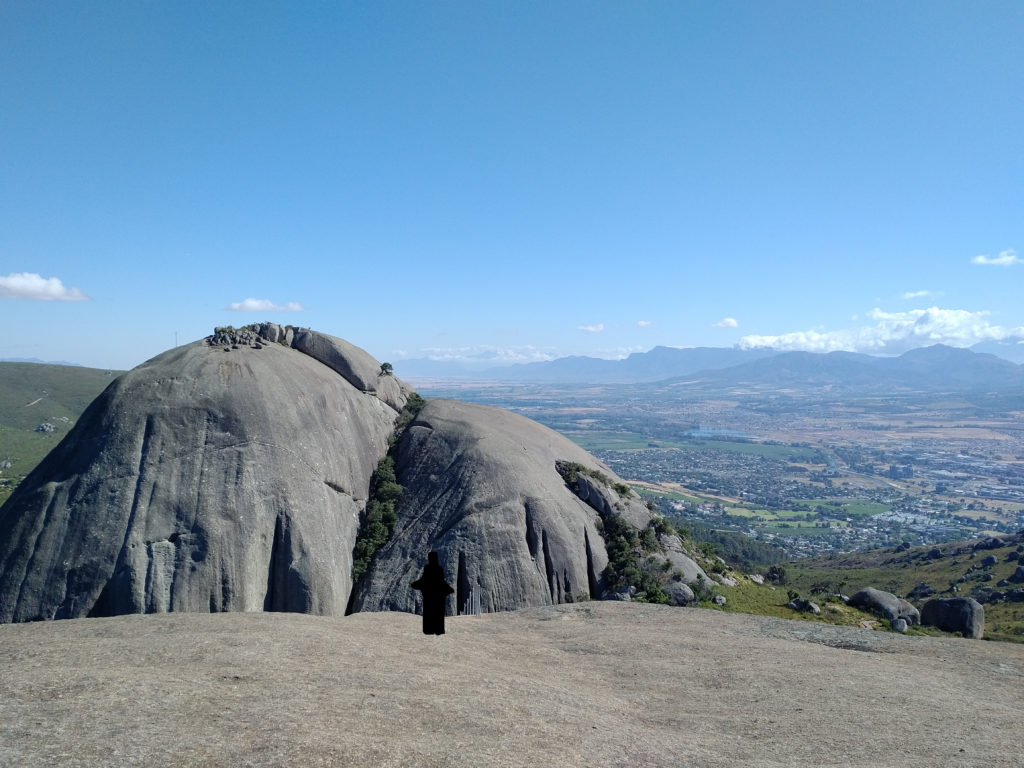 Gordon Rock as seen from the middle part of Bretagne Rock in Paarl. The black blob in the middle is GOU#1 practising her weird stealth mutation.

At this point I feel it is mention-worthy that a lion ate my hat later that day. Literally.

That other planned expedition I mentioned was an absolutely brilliant hike to the top of Table Mountain via Platteklip Gorge, also known as Platties around these parts.

Platties is the steepest (and probably quickest, if you’re fit enough) walking route up Table Mountain. We were at the starting point before 8 AM in the morning to avoid the morning heat, but it was already quite hot (probably about 25+, it was 30+ later).

The walk was exhilarating (I could almost hear my mitochondria gnashing their teeth), and the views from the top textbook-spectacular:

The view from the top of Table Mountain, photo by cpbotha.net.

Shortly after having arrived at the top, I saw a man wearing only shorts who had sort of just ran up the mountain barefoot.

He did not rest, instead choosing to circle around a bush at the top and going straight down again.

Slap-slap-slap, I could hear his feet hit the rocks.

Taking a trip along the photogenic coast-hugging Clarence Drive, we stopped to pay a visit to Dappat se Gat, a sort-of-secret beach.

Once you wade through all the trash from the side of the road :( and cross over a bunch of rocks back in the direction of Gordon’s bay, you find yourself on a beautiful secluded beach with a cave or two.

One of the photos I took came out with suitably interesting shading:

It was hard to ignore the extreme hipness of the young people lounging and playing on the beach as we tried but failed to blend in.

After a short hike (with the little ‘uns) up Leopard’s Kloof in Betty’s Bay a few days later, we were rewarded by scenes of the Disa Uniflora, an orchid which is exceptionally exclusive to our little corner of the planet.

By the power of the internets, I present you with new, more grainy photos of this pretty flower growing peacefully right next to a waterfall: 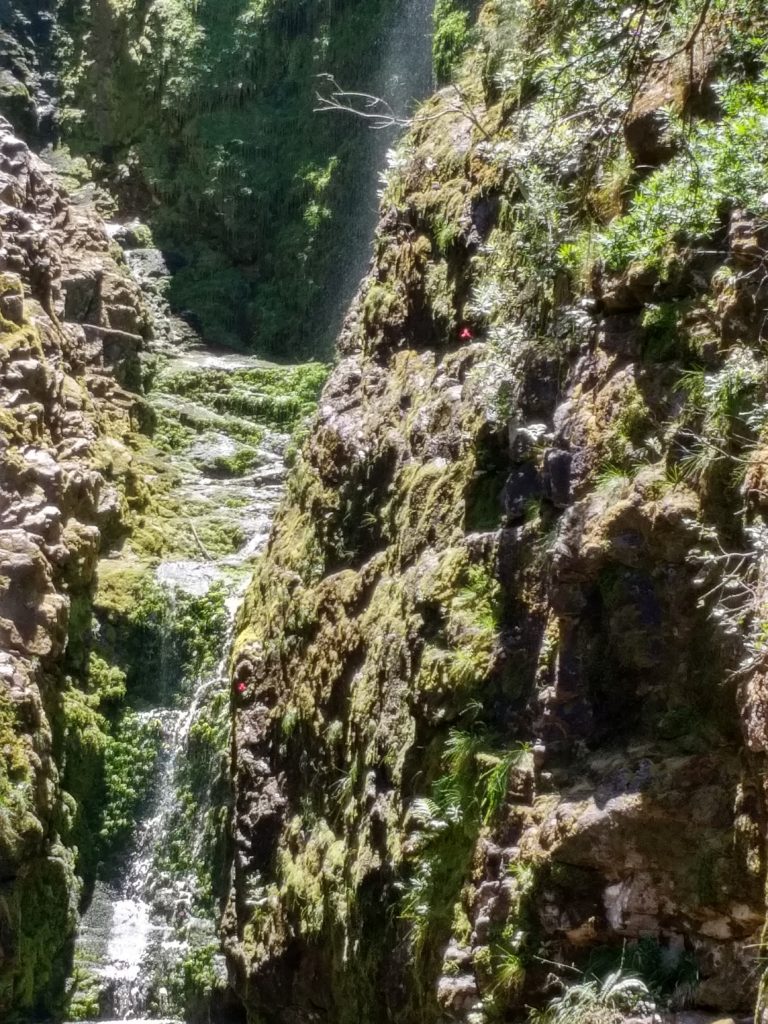 In sharp contrast to last year when I welcomed the new year from the comfort of my bed and a book (hey man, some of us were gestating!), this year a significant number of us entered 2017 in Light Party Mode.

In fact, as the clock struck 00:00, we found ourselves on a rock formation in the sea, in the dark, with waves crashing around us. Pretty neat now that I think about it.

That reminds me, I did see for the first time fully bioluminescent waves! As each wave broke, the foam had a distinct green light. The fact that we were not able to film this (not enough photons) only served to make it more magical.

During the day we were able to try out them new-fangled smartphone high speed video functions, yielding pretty slow motion captures of crashing waves, such as this one:

For the last few work weeks of 2016, I could not help but notice that it was time for a vacation. I had to apply substantial amounts of raw will power (that is, buckling down, hard) every day to maintain my usual levels of production.

This vacation has been wonderful in the sense of causing total brain switch-off from day one. The surroundings definitely played a role in this, but for a large part I think it was due to the active holiday programme we pursued with our friends.

This, and previous experiences, further strengthen the observation that true rest and mental refreshment can be better accomplished by running up and down mountains, swimming in the sea and being generally really busy taking part in new experiences, rather than, you know, actually resting.

However, even after this holiday’s mental rejuvenation and renewed energy, I was still not completely happy with the (admittedly less than before the vacation) amount of will power that was required during the first days of work.

I remembered this to have been much easier in the old days.

Serendipitously, I read and more or less immediately absorbed Cal Newport’s Deep Work into my atoms after my first week at work.

After two weeks of weaving more deepness into my work, it seems that this was indeed the missing piece of the will power puzzle.

Have fun friends! I hope to see you sooner rather than later.

Related posts: 🌤 Deep Work: A welcome kick in the butt. 🌤 The Bluedio Ci3 bluetooth earphones will probably not fit your ears either. 🌤 Weekly Head Voices #100: Happy 2016!