On Ubuntu I mostly use Gnome Flashback with Metacity, along with the brilliant Synapse app starter / file finder. I do this in spite of having a beefy NVIDIA GPU in this Core i7 workstation, because the OpenGL compositing on this 2560×1440 display makes video conferencing really slow, and because I do OpenGL development and need to have maximum performance for the app I’m working on.

However, it irritated me to no end that the window borders were so thin that I was not able to grab them for a resize. Adding insult to injury, there were only the four standard themes in Settings | Appearance, namely Adwaita, Ambiance, Radiance and High Contrast, none of which has usable borders.

The solution is to use the Gnome Tweak Tool (package gnome-tweak-tool) to change the Window theme to something with better borders. I used Watercolor (from the metacity-themes package), and set the rest up as follows on the appearance tab:

Once this is done, your window borders should look like this: 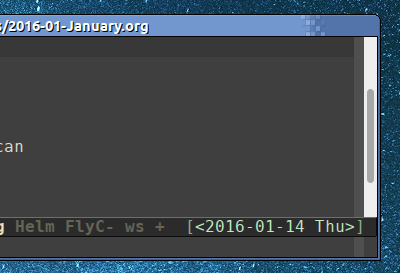 Now you can resize your windows again, AND you can enjoy the snappiness of Gnome Flashback with Metacity!