envedit is a Windows Environment Editor. Use it to edit / set all your user and system environment variables, such as the PATH. I made this tool as the built-in Windows editor (Start | Control Panel | System | Advanced | Environment Variables) is definitely one of the worst user interface examples ever created.

envedit is different from other environment editor tools in that it offers two free-form edit windows. Changes to the complete text will be parsed and applied to the Windows environment keys in the registry. See the screenshot below: 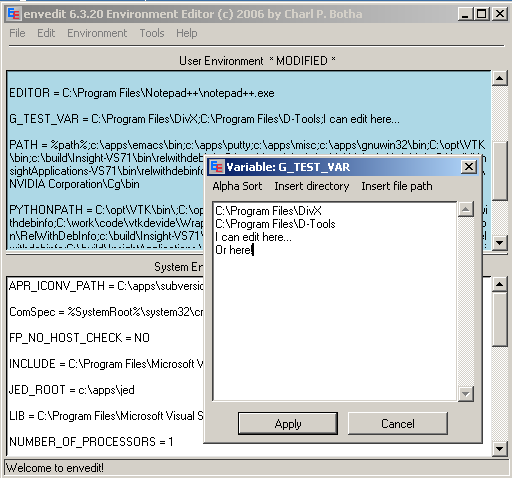 Download the binary installer (setup) and run it to install the tool. You should now have an envedit icon on your desktop.

You can also try Tools | Path Edit current variable [F3] to bring up the path editor, which will allow you to edit the ;-separated paths line by line, and to make use of the directory and file selection dialogs to replace or insert directory and file paths. When invoking this function, your cursor has to be on a non-empty line in the user or system text edit box.

The latest release of envedit is 6.3.20. See the changelog if you’re interested in the changes since previous versions.

You can download a binary installer (setup exe, this is the easiest), a zip file containing the binaries, or the source code.

The source code is released under a BSD open-source license, which also means that the binaries are freeware.

The binary installer includes all its dependencies and should run on a clean Windows installation, i.e. you don’t have to install any other frameworks whatsoever.

We have a Google Code Project Site where you can SVN the latest source or file any bugs that you may come across.