This weekend, Morgan McGuire, graphics and game programming god, tweeted a thread about his text journal based method of software development project management.

Here I single out three of the tweets, but you should really read the whole thread:

When coding, I always maintain a journal in the repo (I happen to use Markdeep for this now) with a TODO list.

Tasks are at the level of one hour for “today” stuff, one day for next week, and then week- or longer level tasks.

I expand the details for the next week on Friday.

When I start working on the top, ~1-hour item, on the list, I immediately expand it recursively until the subtasks are completely braindead to implement.

I do all of the hard part of programming here, in the TODO list, figuring out the library calls, designing the APIs, etc.

When I get into the actual source code, I’m just working from my own walk-through on the TODO list, and I only need to think about syntax and code cleanup. I can focus on programming legibly in the small instead of worrying about the big picture.

He shows the following screenshot as an example: 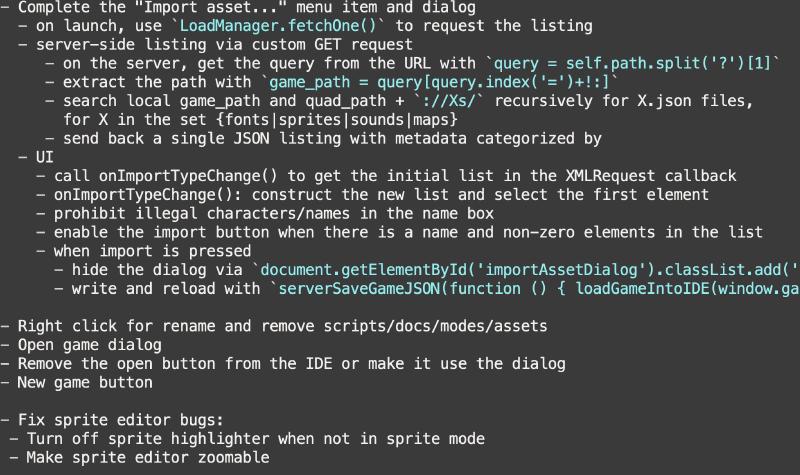 This is such a brilliant way of doing the highest level “programming” in an outlining tool, and then working one’s way down until it’s eventually time to jump into the code.

I can also immediately see how well this would work in a team context.

During the planning session, the outline could be collaboratively fleshed out. Furthermore, as McGuire states, it can be fleshed out differently depending on the experience level of the team member.

This makes me wonder how much we as engineers really need the Jiras and the YouTracks and the DevOpses of the world?

(Just joking folks, I know we need it, but perhaps we could do with a little more MMMMM in our lives?)

A friend from work introduced me to this years ago (thanks HB!), but then I somehow missed its genius.

One of the core ideas that makes markdeep so interesting and useful, is that the markdeep plaintext markup (it’s like supercharged markdown) is embedded in an extremely thin layer of HTML which invokes the markdeep.js renderer on itself.

In other words, you edit the self-contained .md.html file with your favourite text editor, but when you open this file in your browser, a single line of HTML at the end pulls in markdeep.min.js from a CDN or from your local disc, and renders the beautifully typeset version of the document.

As if that was not enough, markdeep has extensive support for the SVG rendering of ascii art.

For my own notes I am sticking to Orgmode (if you’re an emacs user, it’s more powerful), but there will surely be situations where the self-contained Markdeep makes more sense.

Markdeep has been used to author a number of books, but The Graphics Codex must be one of the more amazing examples, in terms of its interactivity and just general prettiness.

I bought the web version not because I currently need a graphics reference, but rather because it is a thing of beauty, and because I wanted to be able to see better how it all works.